Things to Think About

Some languages are better suited for specific industries than others. I’m assuming you are familiar with the most popular programming industries (web development, app development, etc.) Here is a refresher, if you need one.

The best programming language to learn first depends on why you want to learn to code. Is it your dream to become a data scientist? Then JavaScript isn’t for you—it’s a language geared toward the web.

Let’s jump into our picks for the best programming language for beginners.

Python is a language created by Dutch programmer Guido van Rossum. His goal when he was creating Python was to make it the easiest to read programming language in the world. Today, many leading technology companies use Python, including Google and Netflix. 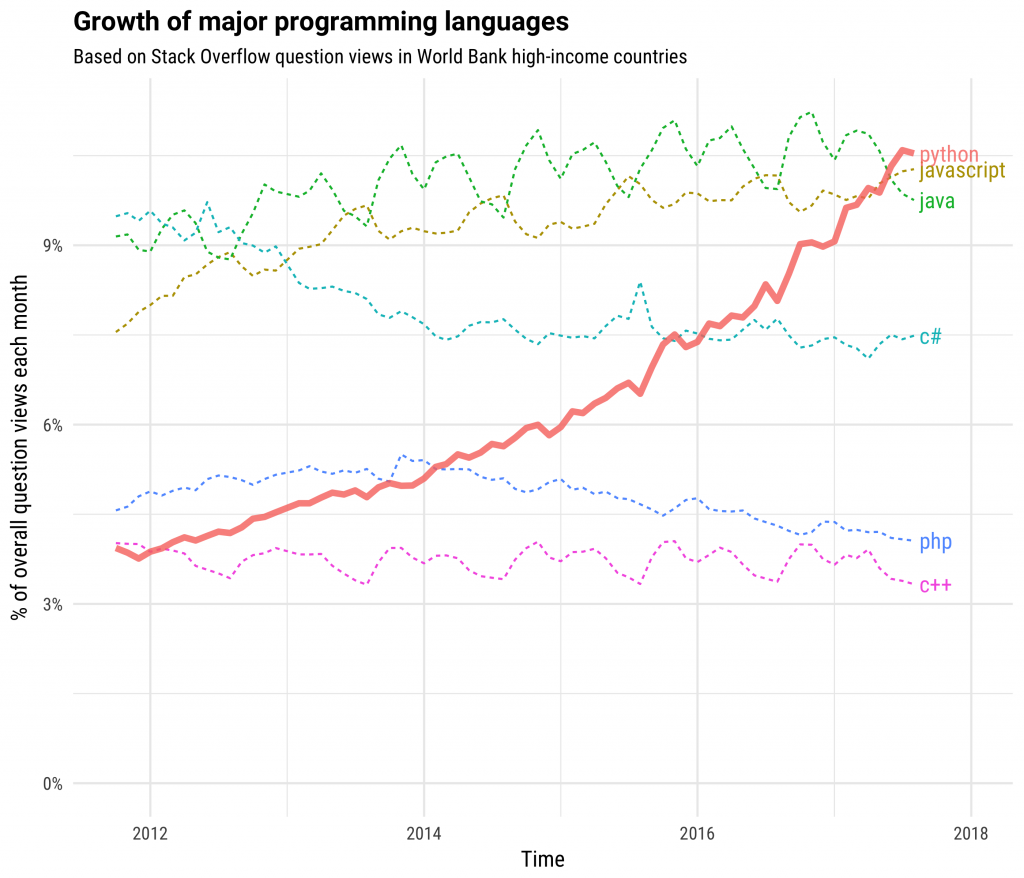 As you can see, Python’s use is growing like crazy.

It’s also one of the most flexible languages since you can use it for web development, data science, machine learning, and more.

Python is also popular in electronics, media, and finance. Python dominates industries like finance and especially finance tech. According to HackerRank, FinTech recruiters look for Python skills more than twice as much as Java.

With its speed and algorithm performance, Python has been called “king of mathematical programming.” It’s also the most important language in data analysis and machine learning, making Python well positioned for the new tech wave of artificial intelligence.

One disadvantage of Python is you can’t use it for front-end web development or front-end app development. So if you know for sure you want to be either a front-end mobile or web developer, you may want to consider starting with one of the other languages on this list.

JavaScript is the only language that gives Python a real run for its money as the most recommended programming language for beginners. One of the main reasons is FreeCodeCamp. FreeCodeCamp is an online course that teaches web development. They have a popular blog, and they use it to promote JavaScript as the best language to learn first.

JavaScript’s growth, however, is still impressive. And because JavaScript is the language of web browsers, demand for JavaScript will remain high for the foreseeable future. JavaScript is also a high-level programming language, which makes it easy to learn.

These qualities make it an excellent coding language to learn first.

JavaScript does have a few downsides. The first is that many programmers don’t consider it a very good language. There is even a famous book called JavaScript: The Good Parts that teaches you how to avoid its unpleasant aspects.

As I mentioned earlier, FreeCodeCamp is one of the best places to learn JavaScript. If you are looking for more suggestions, I put together a list of the best online coding courses for self-taught programmers, which includes several more recommendations for learning JavaScript.

Swift is a high-level programming language designed by Apple. Apple created Swift to power the apps on its platforms.

Apple went out of its way to make Swift friendly for new programmers. It comes with a feature called Swift Playgrounds, which Apple describes as “a revolutionary app for iPad that makes learning Swift interactive and fun. It requires no coding knowledge, so it’s perfect for students just starting out. ”

I tested Swift out, and I enjoyed using it.

The biggest downside of Swift is that it is only useful for building mobile apps, and it only works on Apple’s platform. Therefore, if you are going to start with Swift, you should be confident that is the direction you want to take your career.

If you decide to learn Swift, I recommend starting with Udacity’s free Swift for Beginners course. You can also take The Complete iOS App Development Bootcamp by Angela Yu, which is one of the top-rated courses on Udemy.

Enterprise-level companies rely on the language, including Google, eBay, and Uber. Java also ranked as the most in-demand programming language in a HackerRank survey of 3,000 coding interview challenges. As a Java programmer, you will be able to work in the gaming, web, and mobile app industry.

It’s also a popular language of choice for Big Data. And it is the only language that works on the Android platform. Since 85% of smartphones use Android, Java is an in-demand skill and will be for the foreseeable future.

To show you why I need to teach you how to write your first program. Traditionally, the first program you teach a new coder is how to print the text “Hello, World!”

Here is how to print it in Java:

And here is the same code in Python:

As you can see, the Python code is much simpler. I’m willing to bet you understand how it works without any explanation. The Java code, on the other hand? As a new coder, you probably have no idea what is going on.

Java is much harder for beginners to pick up than languages higher on this list like Python and JavaScript, which means you should be aware you are taking on an extra challenge as a new programmer when you start with Java.

If you are trying to optimize your chances of successfully learning to code, it is not the best coding language to learn.

If you decide to take on the challenge of learning Java, you can take CodeAcademy’s Learn Java introductory course for free or use Coding List to find more resources to learn Java.

So what’s the best programming language to learn first?

I hope this article helped you decide the best coding language to learn. If you want more information about programming for beginners, you can read my book or take my course, where I cover how I went from a novice to a software engineer at eBay in less than one year. If you need extra mentorship, I suggest trying One Month Python.

Best of luck with your coding!

Cory Althoff is a software engineer and writer. He is the author of The Self-Taught Programmer, which Book Authority named as one of the best software books of all-time. Learn more.

I had such a fantastic time at Nissan's party unve

My new book The Self-Taught Computer Scientist is

I surprised Bobbi with a new Canon camera so she c

Do you use Linux?

@mondaydotcom is giving away ANOTHER TESLA! In the

Happy one year anniversary to my wonderful wife an

All you need is... 👆. Learned that one from the

Happy birthday to my wonderful mom!

Richard loves to help me with my writing ✍️

I’m working on a new app for @mondaydotcom! mon

I can’t wait to go to these tech conferences onc

If you are thinking about going to a coding bootca

A lot of people ask me what the best affordable la

Cory Althoff is the author of The Self-Taught Programmer, which Book Authority named one of the best software books of all time. View more posts